To better understand this, we have to understand the complete history of atmospheric carbon dioxide on planet Earth.  The original earth atmosphere was an amazing 47% carbon dioxide compared with the roughly .04% that we have now.  That original atmosphere had so much pressure that it could crush a man flat.  About 2.5 billion years ago, cyanobacteria began using photosynthesis to convert carbon dioxide into free oxygen, which lead to the creation of our oxygen rich "third atmosphere" 2.3 billion years ago.  At that time the carbon dioxide levels were about 7,000 parts per million, but it went into a somewhat steady but uneven decline because geological processes would sequester carbon underground.  The decline was uneven because as part of the "carbon dioxide cycle", sometimes geological processes like volcanoes would cause massive amounts of carbon dioxide to be released back into the atmosphere.

Thirty million years ago during the Oligocene Epoch, the average temperature of the earth was about 7 degrees Celsius warmer than it is now.  There was no ice on the poles, but the amount of carbon dioxide in the atmosphere was in rapid decline during this epoch.  About 23 million years ago, at the beginning of the Neogene period, ice began to form on the poles.  About ten million years ago, a series of intermittent ice ages began that continue to this day.  I found one source that said that we are still technically in an ice age because we still have ice at the poles.

These ice ages helped create human evolution.  The ice ages caused Africa to dry up which lead to some deforestation.  This forced some arboreal (tree dwelling) apes to venture onto land.  About 7 million years ago, the first apes that could comfortably walk upright appeared.  They had evolved a new type of pelvis that allowed upright locomotion, which is about three times more efficient when trying to cross land.

The first tool making ape that resembled modern humans, Homo habilis, arose 2.5 million years ago.  It would be soon followed by Homo erectus, and then about 200,000 years ago, modern humans, Homo sapiens would arise.   However, Homo sapiens almost died out.  About 50,000 years ago an ice age in Europe had caused Africa to almost completely dry up.  The total  human population had dropped to 7,000 individuals living on the southern coast of Africa.  During this period humans learned how to fish, make new tools, and create permanent dwellings.  When the ice age abated, these humans with their new tools spread out to rest of the world at a pace of about a mile per year.  This was the beginning of the Upper Paleolithic (Late Stone Age) period.

More ice ages would follow, and during each ice age human population would decline.  It is no coincidence that all of human civilization (i.e. agriculture, use of metals) would arise during a "brief" warm period between two ice ages starting about 10,000 years ago.  I have heard that no matter what we do, we will enter a new ice age in about 10,000 years from now, but I have also heard speculation that the next ice age will be delayed by global warming.  This actually should be our goal, since humans have always declined during the ice ages and always prospered during the intermittent warm periods.

Carbon dioxide by itself cannot cause significant global warming.  There are diminished returns.  Carbon dioxide has to double again to produce the same effect as the last doubling.  The effect is not linear but logarithmic.  What the alarmists are worried about, and they could be correct, is positive feedback.  The warming of the earth causes more water vapor to enter the atmosphere, and water vapor is a much stronger greenhouse gas than carbon dioxide, thus causing more warming.  If this were true, however, the last warming period around the year 2000 should caused a continuous positive feedback,  a runaway greenhouse, which didn't happen.  Instead temperatures went into a major decline and hit a really big low point in the year 2007.

The worst case scenario is that the polar ice caps will melt.  If that happens we will lose some coastlines and all of Florida due to sea level rise.  However, according to what I just read, it will take 5,000 years for the polar ice caps to melt.  In other words, these are processes that take a very long time to happen.  In this century we are only looking at modest temperature increases.  In the meantime, humans are very adaptable.  We are only five to ten years away from creating the first workable prototypes of nuclear fusion.  It  might take 25 years for this to be practical, but at that point if we wanted to get rid of fossil fuels altogether, we could.  I think that we will also see advances in solar power, which is already happening, and battery technology to store the energy created by solar.  In other words, we have it within our means to avoid any possible disasters that might be coming. 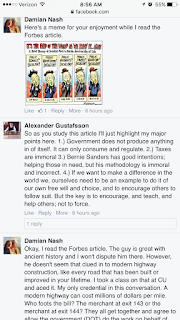 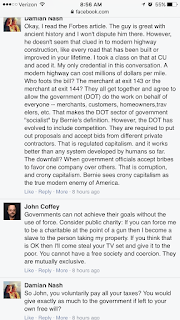 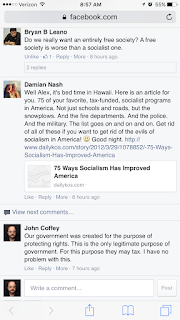 Posted by John Coffey at 6:08 AM No comments:

'The Times breathlessly reveals to us that ISIS "bases its ideology on prophetic texts stating that Islam will be victorious after an apocalyptic battle to be set off once Western armies come to the region. Should that invasion happen, the Islamic State not only would be able to declare its prophecy fulfilled, but could also turn the occurrence into a new recruiting drive at the very moment the terrorist group appears to be losing volunteers."

The newspaper often used by the White House to distribute public relations narratives, then directly tells us, "It is partly that theory that President Obama referred to in his speech on Sunday …"

Now all the bizarre nonsense spewing from Mr. Obama's henchmen and sycophants makes perfect sense, if you're being driven by Koranic prophecy, that is. We've been told for over a year now that we can't confront ISIS directly because … that's what they want!

The singular talking point has been so absurdly pushed, the folks over at the online investigative magazine, Free Beacon, have produced a video titled, "The Islamic State Wants Us To Destroy It," within which they lampoon a litany of talking heads, politicians and academics moving the White House's narrative:

"Dozens of thought leaders familiar with the terrorist group say that its members yearn for the day that close air support from an A-10 Warthog cuts them in half while coalition soldiers storm Raqqa," notes the Beacon. "They are begging for U.S. troops on the ground," former Obama administration official Van Jones said. "That's what they want."

"The one thing ISIS wants the most: American boots on the ground," CNN anchor Fareed Zakaria said. "As long as we're relying on military force, this is the kind of terms [sic] that ISIS wants. This is what strengthens them," Institute for Policy Studies scholar Phyllis Bennis said. "More war is exactly what ISIS wants," Sen. Angus King, Maine independent, said.

Posted by John Coffey at 7:55 AM No comments: