'One in five Americans—the highest in the nation's history—relies on the federal government for everything from housing, health care, and food stamps to college tuition and retirement assistance.

That's more than 67.3 million Americans who receive subsidies from Washington.

Government dependency jumped 8.1 percent in the past year, with the most assistance going toward housing, health and welfare, and retirement.

The federal government spent more taxpayer dollars than ever before in 2011 to subsidize Americans. The average individual who relies on Washington could receive benefits valued at $32,748, more

At the same time, nearly half of the U.S. population (49.5 percent) does not pay any federal income taxes.

In the next 25 years, more than 77 million baby boomers will retire. They will begin collecting checks from Social Security, drawing benefits from Medicare, and relying on Medicaid for long-term care.

As of now, 70 percent of the federal government's budget goes to individual assistance programs, up dramatically in just the past few years' 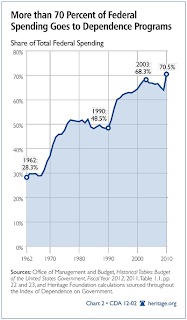 The great and calamitous fiscal trends of our time—dependence on government by an increasing portion of the American population, and soaring debt that threatens the financial integrity of the economy—worsened yet again in 2010 and 2011. The United States has long reached the point at which it must reverse the direction of both trends or face economic and social collapse. Yet policymakers made little progress on either front since the 2010 Index of Dependence on Government was published. Today, more people than ever before—67.3 million Americans, from college students to retirees to welfare beneficiaries—depend on the federal government for housing, food, income, student aid, or other assistance once considered to be the responsibility of individuals, families, neighborhoods, churches, and other civil society institutions. The United States reached another milestone in 2010: For the first time in history, half the population pays no federal income taxes. Related to these disturbing trends, publicly held debt continued its amazing ascent without any plan by the government to pay it back. As if those circumstances were not dire enough, the country is about to witness the largest generational retirement in world history by a population that will depend on currently bankrupted pension and health programs.

The 2012 Index of Dependence on Government highlights the gathering fiscal storm clouds. Unsustainable increases in dependent populations predate the recent recession—and continuing economic morass—and have continued to rise since the economy collapsed in 2008 and 2009. There is one silver lining to those clouds: A few policymakers and independent public policy groups have advanced plans for restoring fiscal balance in Washington. Among them is The Heritage Foundation. Heritage calls its fiscal plan Saving the American Dream. The Heritage plan reforms and funds those government programs that matter most to people who need the government's help, and it frees the private sector to create the millions of jobs that will dramatically reduce the growth of dependence on government.

Virtually no issue so dominates the current public policy debate as the future financial health of the U.S. government. Americans are haunted by the specter of enormously growing mountains of debt that suck the economic and social vitality out of this country. Only the intrepidly stagnant and jobless economic recovery garners more attention, and many are beginning to believe that even that sluggishness is tied to the nation's growing burden of publicly held debt.[1]

Of course, the roots of the problems produced by the great and growing debt lie in the spending behaviors of the federal government. Annual deficits far greater than the government's revenue are fueling explosive levels of debt. One such significant area of rapid growth is those programs that create economic and social dependence on government.

The 2012 publication of the Index of Dependence on Government marks the tenth year that The Heritage Foundation has flashed warning lights about Americans' growing dependence on government programs. For a decade, the Index has signaled troubling and rapid increases in the growth of dependence-creating federal programs, and every year Heritage has raised concerns about the challenges that rapidly growing dependence poses to this country's republican form of government, its economy, and for the broader civil society. Index measurements begin in 1962; since then, the Index score has grown by more than 15 times its original amount. This means that, keeping inflation neutral in the calculations, more than 15 times the resources were committed to paying for people who depend on government in 2010 than in 1962.'