'Tens of thousands of demonstrators packed the streets Monday outside the former U.S. embassy in Tehran in the biggest anti-American rally in years, a show of support for hard-line opponents of President Hassan Rouhani's historic outreach to Washington.

Such protests occur every year outside the former embassy compound to mark the anniversary of the 1979 takeover following the Islamic Revolution. But the latest demonstration is the largest in years after calls by groups such as the powerful Revolutionary Guard for a major showing, including chants of "death to America" that some of Rouhani's backers have urged halted.' 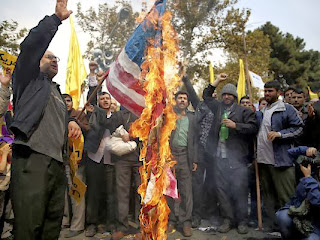