'China has vowed to step up its presence in the South China Sea in a provocative new military white paper, amid warnings that a US-China war is "inevitable" unless Washington drops its objections to Beijing's activities.

In the new policy document published on Tuesday, China outlined its plans to shift from a defensive military posture to placing emphasis on offensive capabilities…

In an editorial in The Global Times, a tabloid owned by the Chinese Communist Party through another newspaper, the paper described the construction of runways, harbour facilities and buildings on the disputed Spratly Islands as the nation's "most important bottom line".

The article – which appeared just days after a US aircraft ignored repeated warnings from the Chinese military to fly a reconnaissance mission over the islands – said Beijing does not want a conflict with the US, "but if it were to come, we have to accept it."

"If the United States' bottom line is that China has to halt its activities, then a US-China war is inevitable in the South China Sea", said the paper, which is often seen as a mouthpiece of the government in Beijing.' 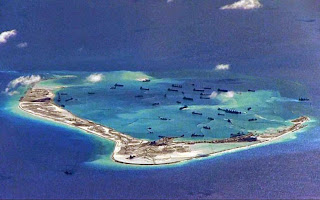