Something very interesting happens to the Earth's Climate roughly every 100,000 years.  The Earth's temperature very quickly spikes up 8 to 15 degrees Celcius, followed by at least 10,000 years of relatively stable warm temperatures.  This is then followed by a rapid decline in temperature leading to 80,000 to 90,000 years of glaciation where half of North America is covered by glaciers, during which time the Earth slowly gets colder.  Then the cycle repeats.  The last time we experienced rapid warming was about 11,000 years ago.  All of human civilization arose during this brief warm period, thanks in part to the fertile crescent in the Middle East making grains more available.
We should be in the cool-down phase by now, but anthropogenic greenhouse gases have at least temporarily delayed it.  It was predicted in the 1970s that we were entering a new ice age.  A period from 1500 to 1850 has been labeled "the little ice age", however, atmospheric CO2 levels started to go up in the 1800s.  Some have said that no matter what we do we can't avoid the next period of mass glaciation roughly 10,00 years from now, while others have suggested that we can delay it.  Previous ice ages have caused massive declines in the human population.
These temperature cycles are caused by the roughly 5 different Malankovich cycles aligning with each other to produce rapid warming.  These cycles affect the Earth's orbit and its axial tilt.  The Earth is currently halfway between its maximum tilt and its minimum tilt, which has a 41,000-year cycle.  At the maximum tilt, the glaciers melt more, reducing the Earth's albedo, which means that less sunlight is reflected into space.  The increasing temperatures cause the oceans to release more of their stored CO2 into the atmosphere, which creates a temporary positive feedback loop.  The warming effect of CO2 in the atmosphere is logarithmic, which means that it reaches a saturation point, producing a temporarily stable warm climate. 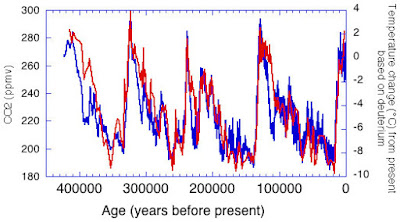 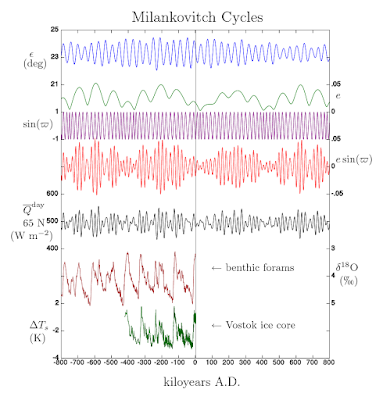