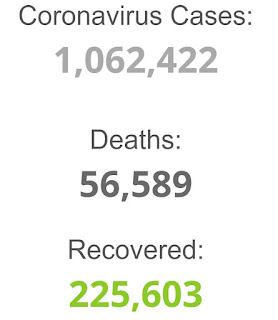 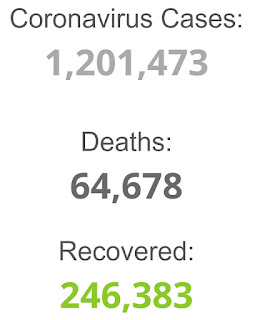 Someone asked me what I conclude from this, and I wrote the following:
We are told that there are much more infected that have not been tested. So the number of known cases depends upon the number tested. However, the number infected still appears to be growing exponentially, and given the covert nature of this virus and how infectious it is, it seems to me that this will continue to spread exponentially. The idea that this might peak around April 15nth seems optimistic and maybe unrealistic, but even if true, that's still a great many more people who are going to be infected.
https://www.youtube.com/watch?v=gtEexDxAPnI
A couple of days ago I wrote this:

March was a terrible month. The math does not look good. We went from 7,000 cases worldwide to a million. At this rate, we could be at 100 million by the end of April. By the end of May, the whole world could be infected. A month ago the United States was barely affected, and now it is everywhere.

This appears to be far worse than what public officials are willing to admit. The virus is projected to peak in different places anywhere from mid-April to late May. Can we afford to have our economy shut down for two whole months? Two months is not the end of it, because the disease is likely to be at its peak throughout May. Can we afford to have most of the population isolated for four months?

I'm worried that society will break down. You might not be able to get basic supplies.

At some point, we might have to isolate the people most at risk and let the disease run its course. A recent article said that the death rate is really under 1%, but even so, we seem to be headed toward 5 billion people infected as one expert predicted. We could be looking at Spanish flu numbers where between 50 to 100 million people will die.

I am hoping that they can fast track some treatment. A vaccine may be a long way off, but if they can treat the worst off then they could cut down on the mortality. As people recover then herd immunity will slow down the virus.

I have seen a couple of different conspiracy theorists claim that this is a weaponized virus created in a Chinese lab from a virus originally modified in the United States. The experts say that it is not. The virus appears to have come from bats. However, at this point, it doesn't matter, because either way, it is an extremely contagious virus with relatively high mortality. That's the reality that we are faced with.