'A Communist party campaign during which crosses have been stripped from the roofs of more than 1,200 Chinese churches is being conducted "for the sake of safety and beauty", a government official has claimed.

Human rights activists accuse authorities in Zhejiang province in eastern China of using the protracted campaign to slow Christianity's growth in what is one of the country's most churchgoing regions.

By some estimates, China is now home to 100 million Christians, compared with the Communist party's 88 million members.

Since the government campaign began in late 2013, hundreds of places of worship have had bright red crosses removed. Some churches have been completely demolished, while civil servants have been banned from practising religion. Some observers suspect the campaign has the backing of the Chinese president, Xi Jinping, and could be a "pilot project" before a nationwide crackdown.'

'What happened in 1979? For starters, there was the takeover of the Grand Mosque in Mecca by Islamist extremists who challenged the religious credentials of the Saudi ruling family, accusing them of impiety. The al-Sauds responded by forging a new bargain with their religious conservatives: Let us stay in power and we'll give you a freer hand in setting social norms, relations between the sexes and religious education inside Saudi Arabia — and vast resources to spread the puritanical, anti-women, anti-Shiite, anti-pluralistic Sunni Wahhabi fundamentalism to mosques and schools around the world.

This Saudi lurch backward coincided with Iran's Islamic Revolution in 1979, which brought Ayatollah Ruhollah Khomeini to power. That revolution set up a global competition between Shiite Iran and Sunni Saudi Arabia for leadership of the Muslim world, and it also led to a big surge in oil prices that gave both regimes more money than ever to export Shiite and Sunni fundamentalism. That is why the Egyptian scholar Mamoun Fandy liked to say, "Islam lost its brakes in 1979."

That competition was further fueled by the Soviet invasion of Afghanistan in 1979 — which spawned the Sunni jihadist movement and eventually Al Qaeda — and by the Three Mile Island nuclear accident, also in 1979, which basically ended all new building of nuclear power plants in America, making us more dependent on fossil fuels. Of course, the Islamic Revolution in Iran also led to a break in relations with the U.S. — and shifted Iran from a tacit ally of Israel's to a country wishing "death to Israel."'

'On July 9, Agence France-Presse reported that the International Monetary Fund estimated Saudi Arabia, whose population tripled since 1975, would run a budget deficit this year exceeding "$130 billion, the largest in the kingdom's history," and "to finance spending Riyadh has already withdrawn $52.3 billion from its fiscal reserves in the first five months of the year." Iran's population has doubled since 1979, and 60 percent of its residents are under 30 and it has 20 percent unemployment. Last April, Issa Kalantari, a former Iranian agriculture minister, warned that because of dwindling water resources, and over-exploitation, if Iran doesn't radically change its water usage "50 million people — 70 percent of Iranians — will have no choice but to leave the country," Al-Monitor reported.'

Robert,
I am not sure you stand on this issue, but the skeptics have valid points.  What bothers me about the left is that they take the same position they take on every issue, which is that if you don't agree with them you are either stupid or evil.  Rarely do they argue the points being made.  Instead they engage in character assassination.
The alternative is to attack those opponents on the extreme fringe.  This is sort of a straw man argument because it doesn't acknowledge that some people have legitimate arguments. For example, they say that all skeptics deny that global warming is taking place.  Maybe a few do, but the real issue is not whether it is taking place, which few dispute, but how much will we get and will it lead to disaster?
http://youtu.be/0gDErDwXqhc
When you have politically funded and motivated science, then it is not real science at all  Some of it could be, but I question the motivations of at least some of those involved.  This is science to push an agenda.
​
--
Best wishes,

http://www.entertainmentjourney.com
Posted by John Coffey at 5:53 PM No comments:

Fwd: Two of a kind

Obama and Trump: Two of a Kind

Posted by John Coffey at 8:59 PM No comments:

'The leader of a terrorist group bent on attacking the United States and other western targets was killed in a targeted strike earlier this month, the Pentagon said Tuesday.

Muhsin al Fadhli, a Kuwaiti-born jihadi with a $7 million bounty on his head from the U.S. government, was the leader of the Khorasan Group -- a collection of senior al Qaeda members who had moved into Syria amid the chaotic destruction of the country in recent years.

"His death will degrade and disrupt ongoing external operations of al-Qaeda against the United States and our allies and partners," Pentagon spokesman Capt. Jeff Davis said in a written statement…

While terrorist groups like ISIS and the al Qaeda affiliate Jabhat al-Nusra are responsible for much of the violence inside Syria, the Khorasan Group was believed to direct most of its energy plotting external attacks in the West…

Al Fadhli who fought alongside al Qaeda and the Taliban in Afghanistan, and was among the "few trusted al Qaeda leaders that received advanced notification of the September 11, 2001, attacks," Davis said.'

Posted by John Coffey at 7:27 PM No comments:

​Whereas the internet has allowed an explosion of capitalism and production, along with allowing many people to skirt onerous  government regulation​, the writer seems to see this as the path away from capitalism.  The only issue is of information, which I grant in many cases can't be protected.
If Marx imagined a world where information and automation rule, then I haven't given him enough credit.  I imagined Marx as an idiot who didn't understand the most important of market forces:  Incentive.
--
Best wishes,

http://www.entertainmentjourney.com
Posted by John Coffey at 7:19 PM No comments:

Posted by John Coffey at 4:55 PM No comments:

'Russia's advance into previously uncontested Georgian territory demonstrates that, despite its preoccupation with Ukraine, Moscow remains determined to derail Georgia's pro-Western course. This risks once more upsetting the geopolitical balance in the South Caucasus region.

Not only did this land grab disrupt the lives of villagers, whose households ended up overnight inside Russian-controlled territory, but a kilometer-long section of the BP-operated Baku-Supsa oil pipeline now lies outside of Tbilisi's reach. With Western attention focused elsewhere, Georgia has again been left on its own to grapple with a major challenge'

Posted by John Coffey at 4:08 PM No comments:

'A few years ago, the prestigious economic publication, Journal of Economic Literature, dubbed the period from 1980 to 2005 "the age of Milton Friedman." Harvard University economist Andrei Schleifer described this era of greater reliance on free markets and privatization, as arguably the period of greatest economic advance for mankind in world history. It would be hard to argue against that. As freedom and free markets were on the march, more than 1 billion people worldwide, mostly in China and India, moved out of poverty. Tens of trillions of dollars of new wealth were created worldwide.

But the last decade could be described as the comeback of socialism. In response to the financial crisis, nations foolheartedly turned to central governments to steer them out of crisis. Government debt, spending and regulatory activity soared all across Europe and in the United States. The Keynesian model that government welfare spending as a "stimulus" came storming back in vogue — nowhere more so than in the United States.

Many countries, including Greece, Italy, Spain, Portugal and France — as well as the United States — experimented with quasi-socialist governments. Now the bitter price is being paid.

This more than anything else explains why the world is twisting in financial turmoil in recent weeks. Not just Greece, but at least a half a dozen nations appear to be on the verge of bankruptcy because they can't afford the social welfare states they have, and the bills are coming due. The socialists are getting hammered..

Shortly before he died, Milton Friedman lamented: The enduring lesson of the 20th century is that socialism is a failure and free markets are a success. But the politicians keep advocating just a little more socialism." That is precisely what is ailing the world economy today.'

'Bernie Sanders drew more than 11,000 people to a rally Saturday night in downtown Phoenix -- the largest crowd to date for a presidential candidate whose audiences have been swelling in recent months…

Aides to the self-described socialist had originally booked a Phoenix theater that could accommodate fewer than half the number of people who turned out. The crowd estimate of more than 11,000 people was provided by staff at the convention center, where Sanders also appeared Saturday at a convention of progressive activists…

Saturday night's crowd -- in a reliably red state -- surpassed Sanders's previous largest draw, a few weeks ago in Madison, Wis., where close to 10,000 people turned out.'

'"I'm the only presidential candidate who will tell you this," he said to a roaring crowd, "no president, no matter how good [he or she is] can bring about the change we need in this country unless there is a political revolution."' 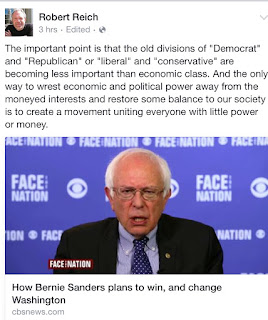 The People of Palestine Have a Message for #BlackLivesMatter Protesters in the U.S.

http://mic.com/articles/121826/palestines-have-message-for-black-lives-matter-protesters-in-us
Posted by John Coffey at 7:59 AM No comments: